A real royalistic artwork with a weight of 500 Kg.

It consists of an acrylic panel on wood and steel, 2,80m x 2m, painted on both sides in acrylic and 24 carat Gold.

With the portrait of Her Majesty in original size with diamonds in the eyes.

Under the acrylic panel there are 1.000 perfume bottles with the fragrance „Queen Elizabeth-Scent of Rose“.

45.000 crystals are integrated in the crowns of the cap, handmade in England.

The german artist Heiko Saxo lives and works in England. The concept book „Golden Hearts Never Die“ with 180 pages created by the artist consists the initiative in shapes, colours, tones and fragrances with all planned creations.

Since 2003 this book is at Buckingham Palace with Queen Elizabeth.

Today all creations were realised and the products are combined in this unique artwork.

Products which are integrated in the Perfume-Artwork:

• Medal in 999 Silver to 80th birthday of Her Majesty, embossed with portrait of Queen Elizabeth, with angels and text „Golden Hearts Never Die“ (2006)

• Perfume „Queen Elizabeth Symphony“ with the fragrance „Scent of Rose“, created in Grasse (2007)

To the german state visit of Her Majesty in 2004 commemorative cards were produced with the Queen Elizabeth motif and special stamp „Golden Hearts Never Die“.

Later in 2004 the original painting „Queen Elizabeth“ was auktioned by Christies.

With the same motif stamps were produced by Deutsche Post in 2009.

Paintings of Her Majesty and Queen Mum created by the artist were used as labels on wine bottles which were offered on the wine card of Hotel Adlon to german state visit of Her Majesty in 2004. To the same occasion "The Royal Laser Symphony" – a graphic and effect lasershow synchronized to "The Royal Symphony“ was performed.

Bernie Ecclestone admires the work by Heiko Saxo and his perfume artwork, too.

All creations of the artist are accepted by Her Majesty Queen Elizabeth II.

The owner of the artwork is Golden Hearts Never Die Ltd.

Price of the artwork: PoA 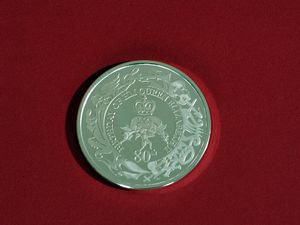 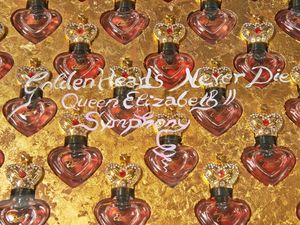